The car’s thermometer this morning shows -19°C. Very reluctantly, of course, that is. The display is malfunctioning due to the cold: the liquid crystals don’t seem to be too liquid any more. The entire care is coverd in a chrystal gleam, the snow scrunches under the feet with each step. The breath is freezing to the car’s window panes.

It takes ages to start the car. For around 30 seconds nothing happens at all. Then, an onccassional blow, the car shakes. Slowly these blows increase to occur, the engine starts running very slowly at around 400 rpm but still needs the support of the starter motor. After like 90s finally the combustion itself keeps the engine running, still not on all cylinders, but the inital heat created by the first ignitions finally makes all cylinders stabilize. Two minutes later the engine is running normally.

We are driving again to the Volkswagen Service, a modern post-2000 building at the outskirts of Kurk, and this time, really, the service center is open. We receive a warm welcome and the car is being driven to the “express service” lane. We are trying to explain our problem with gestures and rudimentary Russian knowledge (nobody speaks English at all, including the sales personel and the manager).  We also ask them to mount the studded tyres – and only then I notice that I have forgotten the box with the wheels’ screws at the reception desk of the hotel. A short call by my co-driver, and the receptionist is taking care of the screws. Meanwhile, the servicemen are examining the car and its generator in a huge hall, echoing russian dance music.

Then for a while nothing happens. After some time we are trying to use the facilities, but the toilet is simply frozen. I start to understand a bit about this country…

After some time, we are speaking to what appears to be the manager and it turns out that in their view the generator needs to be serviced, but they would not have any presonel to do that.  This reminds us of yesterday. The voice with the heavy Russian accent is echoing in my mind: “Best you go to Volkswagen tomorrow. If they cannot repair it, you call Victor.”. 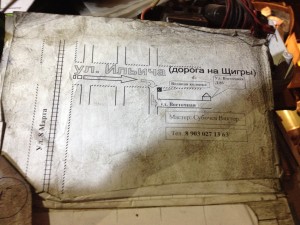 We are showing the photo of the old drawing of the location of Victor’s place to the manager. He gives Victor a short ring, all seems well. A few minutes later “Taxi. Victor”.  – “Da.”.

One of the servicemen and my co-driver a driving to Victor. For a good while I don’t hear anything, until they return. “The generator was broken, not only the carbon brushes.” – “Oh, really? Never heard this would happen at all. Usually it is always the carbon brushes being worn out.”. – “It seems, in Russia this happens more often.”. 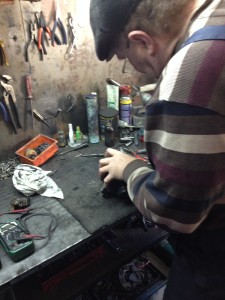 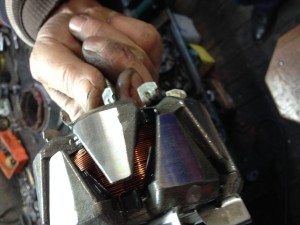 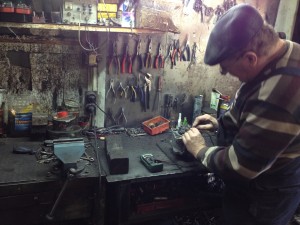 The servicemen remount the serviced generator – and the car produces full voltage again.

We are quickly unloading the car to access the studded tyres – as quickly as this is possible with the large amounts of luggage that we are transporting and while being in a service garage. The serviceman mounts the centrification rings and starts to mount the tyres – they still don’t fit. I’m perplexed. The entire equipment was sold based on the car’s precise data by a professional German seller. What the… ? It turns out the screws are not fitting – they are too long. They simply packed the wrong screws. We are re-using the old screws, all tyres are being mounted, and finally we are ready to go. The entire service costed around 35 EUR + another 100 for Victor (which must have been the deal of his life, but that was ok for us).

We shortly return to the hotel, before in the early afternoon we begin to head eastwards again.