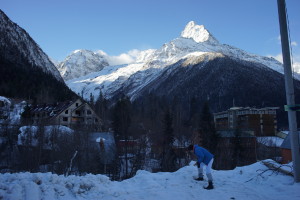 Finally the new day dawns fair. The deep hanging, depressingly grey clouds of the previous day have vanished and reveal high-alpine mountain scenery surrounding this narrow end of the valley, in which lies Dombai – one of the classic ski resorts of the Caucasus.

One of the more peculiar things about skiing in Russia (and some of the other states formlery part of the Sowjet Union) is that it is not too extraordinary that one and the same mountain has been developped by several independent lift companies over the years. In Domabi, e.g,, there are three of them. That means that you can choose between three independent chains of lifts to get to one and the same summit, each of which requires an independet skipass (=payment). They all serve (more or less) the same slopes. Sometimes, giving some Rubel to the lift’s operator helps, if you want to use one of the other lifts once (in Dombai we did this once on the highest lift, which is relatively new and not part of the company at which we had bought).

We choose a classic line: the chain of four chairlifts dating back a couple of decades, which will lift you to the top at over 3000m altitude in no less than 54 min (sic!). Lots of time to enjoy the vintage lifts and the great panorama. Tickets are sold in a little office with a desk in the valley. 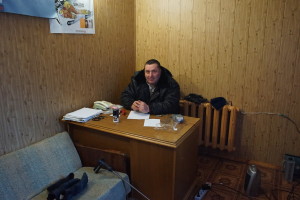 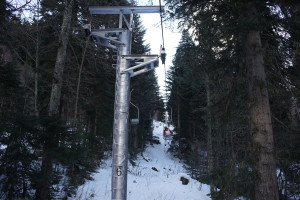 The first leg: a vintage single-seater charilift, which has the peculiar particularity to pass “under” the tree (instead of between or above). 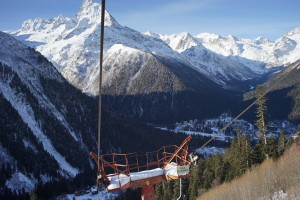 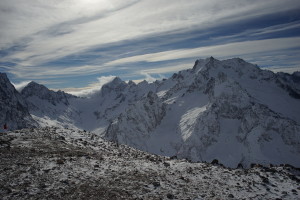 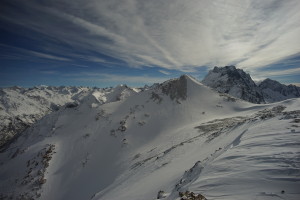 The stream of bad weather is casting first sign upon the sky, though… 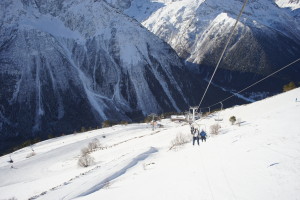 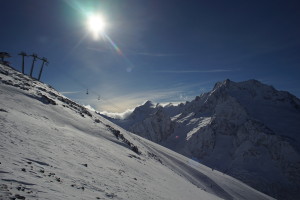 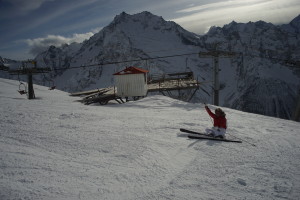 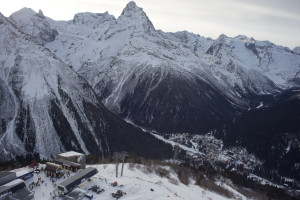 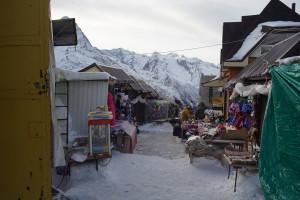 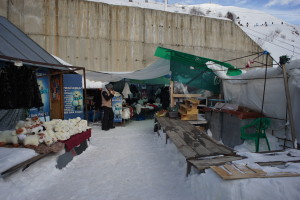 Dombai, too, is a very “lively” skiing area: seemingly hundreds of little stands will try to sell your seemingly anything you may or may not need. This is where I finally understood, what a “ski-basar” really is. 🙂 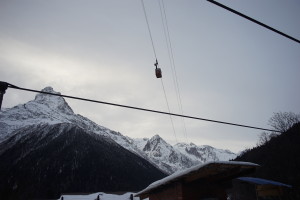 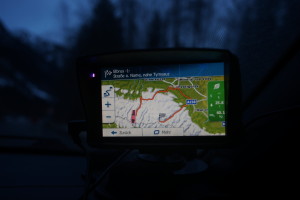 The weather gets worse and worse in the afternoon, the air temperatures drops significantly and a chill wind keeps whiffing over the exposed mountain flanks. In the late afternoon we are skiing down back into the valley, stow our skis and start to drive down the valley.

While Dombai and the Elbrus, where we are heading next, are spaced less than 50km as the crow flies, the road takes a long detour, which makes a 5.5 hour drive. We following the road back out of the valley as far as Karachaevsk. From their a small mountain roads heads eastwards.

The Caucasus always gives a somewhat remote, not to say “wild” feeling when driving its roads, especially its side roads. This one passes a few isolated houses still in the beginning, but soon these will disappear, leading for kilometers through a dark wild countryside, and no lights and domiciles come into view for what seems ages. Kilometers and kilometers the narrow road whinds up into the mountains in several bends, the tarmac starts to freeze and is finally nothing but a thick layer of ice on the windy pass around 2000m of altitude. A treacherrous drive, less because of the ice itself (with some experience and the help of the studded tyres this can be handled), but more because the icy surface is highly uneven, full of deep holes and severe threats to the car’s suspension.

Finally, an hour or so later, the lights of Essentukskaya ( – please learn all the villages’ named in the blog entry by heart until next Tuesday 😉 – ). We run into another police check-point- there must have been more than 25 over the last few days. This one is a slightly smaller road, and the control runs less professional than the previous ones. After the usual russian words requesting several documents, the police officer suddenly requests a translation. I find this highly unusual. None of the previous ones ever even asked for a translation (the symbols on the driving license are pretty self-explaining anyway). So I keep insisting that I would not have a translation, but that the symbols should do. The police officer requests me to come into the post. A gloomy gangway into a backyards, dogs running around me, then I find myself back in a somewhat shabby room, face to face with two police officers. I am pretty sure I know what they are after: money. So, this is going to be a game of patience. We are playing the game for some 15 minutes, until I receive my documents back and leave the check-point: without paying them any bribe.

We continue on our road, the traffic around Pyatigorsk at night is even worse than in the dayilight, and it costs lots of concentration to prevent accidents (including those which would not be your fault, but still in fact a desaster for us). It is late in the evening when we turn into the valley to Terskol. Tomorrow we are expecting another fair day at Elbrus by the forecast, but the signs in the sky clearly indicated the opposite today. And really, a strong chill winds is blowing down that valley and it begins to snow again.

We run into another checkpoint, and again I am being asked to come into the station – allegedly because I did not stop at the stop sign (which is halfly true: you usually slow down and then slowly pass-by to allow the police officers to stop you if they want, but nobody stops to a full halt in order not to slow down the traffic).

The storm is rattling the small container and inside the chief-officer is a bald and suqare guy, with a head as large as a mellon. He starts talking, mostly in Russian with a few English words in between. Then he looks into my documents, before he suddenly turns direcly at me and shouts (in German): “(C)Hände (C)hoch!!” (- Hands Up!! ), forming a gun with his hands and pointing it at me. I keep still and look into his eyes – I remember this kind of games from my Russian colleagues in the army, ages ago. And, as expected, he starts laughing in a deep voice : KHAKHAKHAKHA. I join the laughter in the same way. He pats my shoulder, the affair is sort of settled. I receive back my documents, and we drive on. Somewhen after midnight we find our small hotel in the forlorn corner of the valley, snow swirling heavily in the wind. A thin young girl, with a face the eyes of which appear to have seen decades of life and marked by lines, receives as silently. I wonder whether I find her beautiful, or haunting… I suppose both…