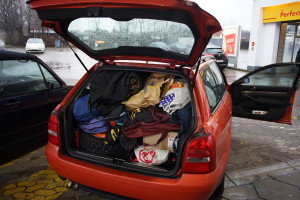 Originally we intended to start the trip on 30 Dec in the afternoon. Now, things do not always work as planned and so it was only after a relatively short distance that I noticed that the right front brake wouldn’t work properly. When this issue became more and more intense, I finally took a stop to have a look – and found a darkly red glowing brake disc. The failure was relatively clear: brake calipers in Audis tend to get stuck if they are older, causing a bearly noticeable slight, but constant touch of the break eventually resulting in great heat and fatigue. There was nothing to be done than slowly returning home, stopping at each motorway station or parking to cool the brake with water.

Now, the issue is that clearly31 Dec is not a very good date to get a brake being repaired. Moreover, on 1st Jan obviously all garages are closed, and so they are on 2nd and 3rd this year, because this is saturday and sunday. That created a serious risk of delaying the entire trip for over 4 days, rendering many of the envisaged waypoints questionable. Luckily enough, the great mechanics team of the garage I am working with, was willing to repair the car on 31 Dec directly in the morning – the owner personally driving around the city to try and collect that spare parts! (Try that at Audi’s contractural garages: you won’t even talk to a mechanic, and without scheduling repair a week ahead, nothing will ever happen!).

It was almost noon when we finally hit the road. The dark grey intense rain showers gave way to a fair winter afternoon east of Berlin, and then into Poland on perfect roads to the western outskirts of Warsawa. Strange to pass by this country so meaningful to me in such haste, excited about the unkown lands to the East, and bittersweet about PL at the same time… 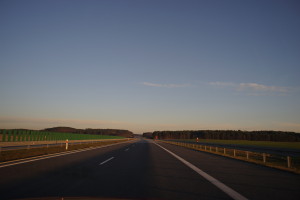 We reached the border to Ukraine around 23h00. The formalities taking around an hour we almost experienced the perculiar situation of missing New Year: Ukraine is UTC+2 while Poland is UTC+1, and when you pass the border between 23h00 und 24h00 in eastern direction on 31 Dec it will never be 00h00.

A lonesome road through the dead of the night, seemingly endless woods and a straight line of tarmac for miles in the middle of nowhere. Surreal to talk to friends and relatives on the satellite phone at 01h00 (which was 00h00 back home) while driving through that lonely night. 580km and 5 hours later, Kiew. Meanwhile snowy roads, open fuel statiosn which would not sell any fuel, but resulted in me leaving petrol cap on the car’s roof… we noticed the noise of the flap closing only some 10 kilometers later, turned and with the help of the GPS found back the fuel station in the heart of Kiev’s labyrinth of roads. I was walking down the speedway with a flash light, and really, after a few meters, I finally found back the fuel cap. 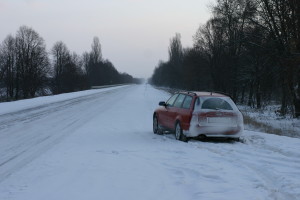 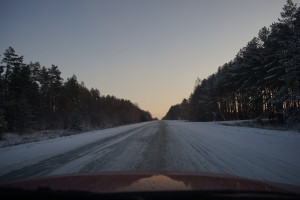 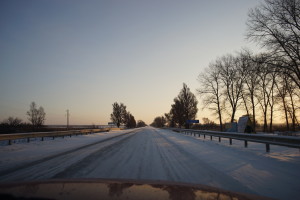 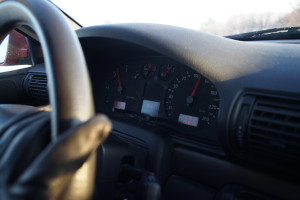 Around 11h00 we finally hit the Russian border. On the last meters the Ukranian military stopped us, the guy was very friendly and asked us to drive some documents to his colleauges at the border post some kilometers down the road.

Ukranian customs were way less friendly and moroons though! While entering Ukraine from Poland with a fairly well organised, professional process, exiting Ukraine on the Eastern border was a nightmare. The customs police would not speak any other language than Ukranian and the result was that we had to unpack the car completely and that EVERY of our aournd 25 bags was checked in detail, and half of the car disassembled. All that in the biting cold of around -17°C. This took certainly 2.5 hours by itself. The Russians were way more professional, but we had to unpack again our entire luggage, This procedure plus border formalities took another hour and we were quite frozen by then. When already we thought we had made it, we were asked to fill-out 3 customs forms. And that now was the final nightmare. With lots of it being available in Russian only, and many of the questions being understandble only with good knowledge of the Russian system, it took us around 10 approaches, equal to another 1.5 hours, until we finally got the stamps.

We continued to drive when dusk was already falling… my first time in Russia. Though entirely frozen, our spirits started to lift again, only when we noticed some 20 kilometers short of Kursk that the battery voltage was dropping. This indicates a generator problem, and that is most likely carbon brushes being worn out. The replacement procedure is quick, easy and cheap, but you’d need the spare part. I used to carry one onboard on my old Audi 90 quattro 20V, but not yet on the A4 quattro. So we headed for Kursk, found a hotel, and hope to replace the carbon brushes tomorrow. Only issue is that all Russia is on vacancy from 01 Jan to around 07 Jan due to New Year and Orthodox Chrismas… let’s see!